At The River I Stand

A Screening of “At the River I Stand” 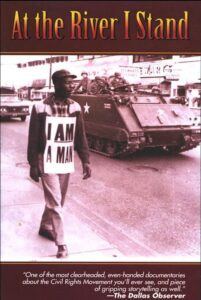 Please join us the screening of “At the River I Stand”, a documentary about the costs and possibilities of nonviolent struggle.
This film reconstructs the two eventful months in 1968 that led to the death of Dr. Martin Luther King, Jr. and the climax of the Civil Rights Movement. It shows how Memphis’s black community rallied behind a strike led by 1,300 sanitation workers for a living wage, summed up by the slogan ‘I Am a Man.’ King joined their struggle to his growing nation-wide Poor People’s Campaign. His non-violent strategy was sorely tested during the 65 day strike, and on April 4, he was murdered. This documentary captures many of the themes of American history that came together in Memphis in 1968: black vs. white, non-violence vs. violence, privilege vs. poverty, and grassroots mobilization vs. national politics.